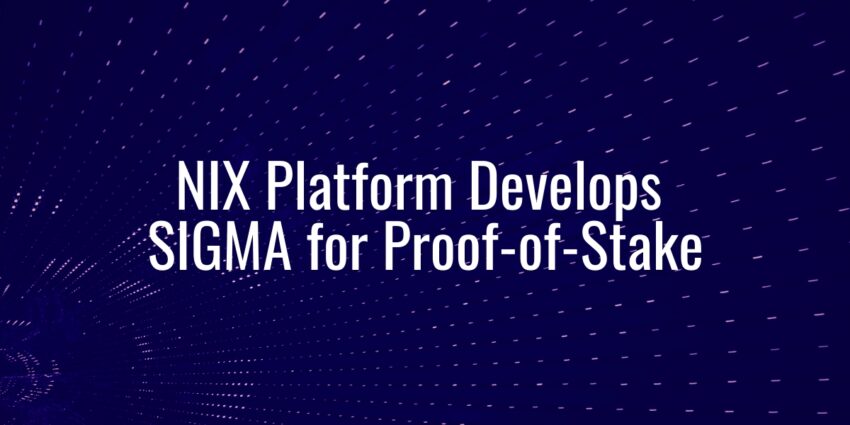 First interviewing NIX October 2018, I’ve followed NIX development for some time. This week I sat down with the NIX team to chat on SIGMA, which seems to be a primary solution to the Zerocoin flaw recently discovered and affecting many projects.

Where is NIX in its implementation of SIGMA, what impact will be felt by this change, and what comes next? Enjoy!

Zcoin is a SIGMA thought leader and has published several articles on the subject. Have NIX and Zcoin discussed the Zerocoin issue and possible solutions?

We are in close contact with Zcoin and extremely grateful to their team for developing the first libraries for the Sigma protocol. We are in a group with several teams discussing the Zerocoin issue and possible solutions. At the moment, there is not a full solution that can be implemented, just quick fixes to the protocol itself.

Currently, both Zcoin and NIX are in testnet performing tests to each codebase. Sigma needed to be adapted to the NIX codebase, which is different from Zcoin’s – NIX is not a Zerocoin based project, but rather a merge of several protocols.

NIX is the first Proof-of-Stake coin to implement Sigma as privacy protocol. The testnet has already been launched and the mainnet transition is set to happen in a few weeks.

“NIX being the first PoS to adopt Sigma as privacy protocol is a huge achievement. Sigma will have the biggest privacy set over older privacy protocols and it is completely trustless and scalable. Sigma adapts perfectly to NIX codebase and use cases, making NIX a key player in privacy and decentralization in the near future.” – Mario / R&D – NIX Platform

How will SIGMA affect NIX? What is the benefit of SIGMA?

In short, Sigma represents a huge upgrade to zerocoin, including smaller size transactions to improve scalability and the creation of a larger privacy set.

Sigma allows us to significantly scale our privacy transactions by decreasing the on-chain size by 94%, as well as remove the trusted set-up previously needed with Zerocoin. This makes privacy on NIX much more scalable while even increasing the anonymity set NIX has to offer.

Sigma has now been adopted into the NIX codebase as a Ghost Protocol addition, and several significant changes have been made in regard to NIX’s existing privacy functionalities:

“The ability to incorporate various protocols into Ghost Protocol shows the dynamics and the strengths of NIX Platform, which puts NIX on a whole new level when compared with other privacy projects.” – WoC / Design – NIX Platform

Beyond SIGMA, the NIX Platform Team is focused on developing a Multi-Currency Wallet with back-end trading capabilities using decentralized orderbooks, also known as the DEX Manager.

NIX Multi-Currency Wallet will become a fully decentralized app where users can securely store and swap different coins whilst making use of NIX strong privacy solutions. A simple user interface in which users (1) choose the coins to be traded, (2) check a privacy box, (3) input the amount of coins to swap, and (4) have as output an equivalent amount of the desired coins. The back-end transaction will be performed via decentralized exchanges. Initial developments will focus on user interaction, future developments will include advanced trading features.

“NIX development is not only relentless, but also progressive and forward thinking.” – Charlie Shrem