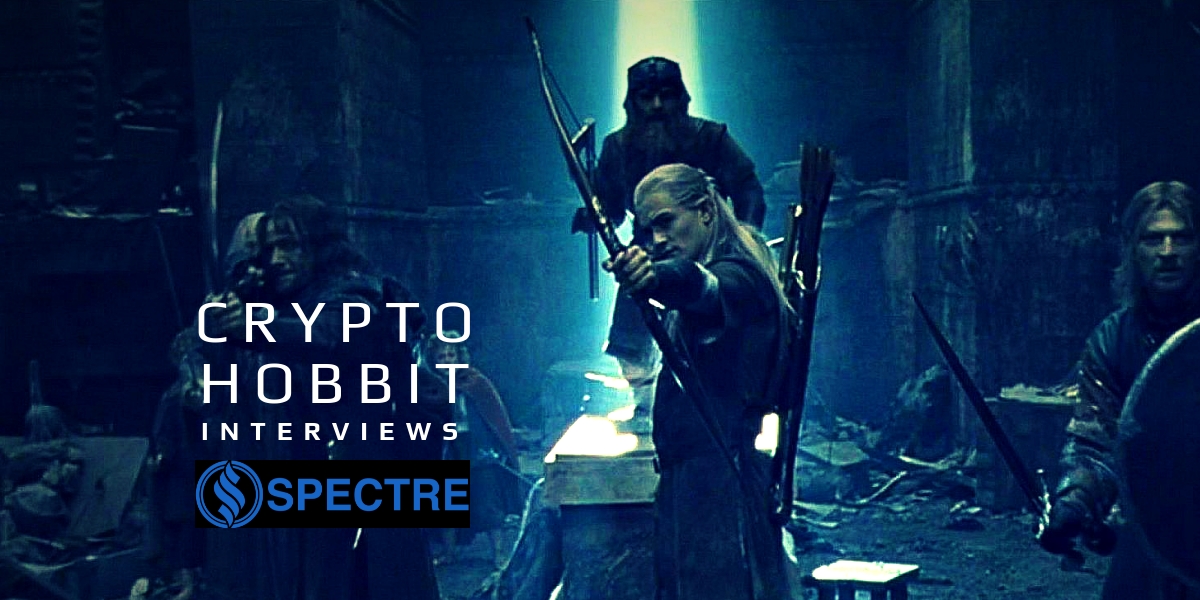 I recently started the Equal-Weight Privacy Coin Index, focused on privacy tech innovation, and it was suggested that Spectrecoin be included as a component. Not knowing much about the project, I had LOTS of questions. Fortunately, @XspecRising  Project Manager, ‘Mandica’ was more than happy to get involved! Enjoy!

Explain Spectrecoin to me as though I’m completely new to cryptocurrencies.

What will be Spectrecoin’s use-cases, or do you consider Spectrecoin as purely a p2p currency?

Our original vision was for a mobile cash-transfer platform using Spectrecoin as the settlement currency in the tradition of the old ‘Hawala’ system. This means that ‘unbanked’ users would be able to send cash to anyone, anywhere and remain anonymous. We are still aiming for a mobile platform, but we focus on getting the privacy tech as up to date as it can be at the moment.

There will be a mobile platform, but the primary use case is for Spectrecoin to act as cash online in the sense that cash in the “real world” is anonymous. In a real-world cash transaction, the parties involved choose what information they want to share about the transaction to the rest of the world. Spectrecoin can serve this function online.

In the world of cryptocurrencies/ blockchain, who are Spectrecoin’s primary competitors? Allies?

Our main competitor that I see is Monero, as we are using very similar technology, i.e. ring signatures to hide the identity of the sender in a transaction and dual-key stealth technology to protect the privacy of the receiver. The main difference between Monero and Spectrecoin is obviously that Monero is proof-of-work and Spectrecoin is proof-of-stake. We believe that proof-of-stake is more secure and obviously more energy efficient and fairer for the participants in the network.

I don’t know if we have any allies as we have always been under attack from everyone for some reason. I feel that we are a bit misunderstood, but maybe the other privacy projects feel threatened now that we have consistent development.

What are some common misconceptions about Spectrecoin that should be cleared up? Tell me more about from where Spectrecoin comes.

Spectrecoin was cloned from the now abandoned ShadowCash (SDC) in late 2016. ShadowCash was an innovative cryptocurrency and ahead of its time and was a perfect code base to build our project on for what we had planned. Let me explain.

The first stealth address (SA) technique was invented by a user known as ‘bytecoin’ in 2011 in the Bitcointalk forum. Later improvements to SA were proposed by van Saberhagen in 2013/14 and by Peter Todd in 2014. The original SA tech had various problems (very technical but I have linked to a relevant paper) and on 02/08/2014 one of the ShadowCash developers known as ‘rynomster’ announced a first fully working implementation of SA tech that is known as dual-key stealth addresses that solved some of the issues in previous proposals. This technique is now widely used and this is an example of how the ShadowCash devs were innovators and this is often forgotten about or misunderstood probably due to insufficient documentation and FUD at the time. The ShadowCash code base was then upgraded to use the dual-key stealth address tech to create a system where anonymous tokens were created by spending standard UTXOs. This system has some principal similarities to the Zerocoin protocol (Anonymity by destruction / creation of basecoins) and we can assume that Zerocoin might have been the inspiration behind it.

A key point here is that the anonymous token creation in ShadowCash did not require any trusted setup like Zerocoin, is less computationally intensive and is based on SA tech instead of the zero-knowledge proofs in Zerocoin. These new anonymous tokens could only be spent by providing a valid ring signature. The ShadowCash devs based this on the CryptoNote protocol but ended up using a hash function that initially allowed the sender of a transaction to be identified. This was discovered by one of the Monero devs, ‘shnoe’ (https://archive.is/3VEHr) and the following discussion with the ShadowCash devs shows that the issue was discussed and finally settled when the ShadowCash devs implemented a fix in v1.3.4. (https://github.com/shadowproject/shadow/issues/25).

The next issue that caused problems for ShadowCash was that they chose to have a HTML based wallet and used Qt WebKit and JavaScript. Besides the fact that this caused build issues there were some serious bugs in the way that they used JavaScript for the UI that caused problems when users attempted to send anonymous tokens using ring signatures. The JS implementation did its own calculations of suggested ring size and those calculations were wrong and would prevent users from sending anonymous tokens from the UI. I suspect that many users thought that the ring signature system in SDC was broken but in fact it was just a JavaScript bug that for some reason was never fixed by the ShadowCash devs. The core functionality of the anonymous tokens / ring signatures worked perfectly fine and once the JavaScript bugs were fixed by the Spectrecoin devs, anonymous transactions can be completed from the UI and works fine. It could be that part of the reason why ShadowCash suffered was the complex HTML based UI and the JavaScript that was never really fixed properly. The Spectrecoin devs have worked really hard to upgrade and fix the UI and we are almost there.

In conclusion, the ShadowCash code base from which Spectrecoin has been cloned is an innovative and elegant system using dual-key stealth address tech with ring signatures to create anonymous transactions. The Spectrecoin devs then further implemented Tor (The Onion Router) into the code base so that all Spectrecoin nodes run as Tor hidden services. Although there are a few clones of Spectrecoin out there, none of them have been developed and so we are in fact quite unique in the cryptospace.

How is Spectrecoin positioning itself in the fight for privacy rights?

I don’t know that we are fighting for privacy rights but we believe that people should be able to communicate and transact in private online as in “real life” but I do not see myself or Spectrecoin as political in any way. I just believe that I should be able to have my privacy if I want without anyone tracking what I do. Spectrecoin is very much focused on privacy technology and a love of technology is one of the main drivers behind the current development direction and a fascination with cryptography. Spectrecoin is very much privacy by design and also privacy as an option at the moment. Sounds strange? Spectrecoin is currently a dual-coin system like for example PIVX, both private and public. You choose. We do consider the option of privacy by default and we can go in that direction but we need to fully develop our new Proof-of-Stealth staking algorithm and logic first.

I do not see regulation having any scope to impact on a fully decentralised network based on open source code. You can’t regulate mathematics and so I am not concerned about that. I know however that vast resources are being put to work in order to de-anonymise blockchains, both standard UTXO blockchains and anonymous blockchains, like Monero.

“What is certain is that anonymity needs to be constantly improved and tested and anyone creating anonymous blockchain tech is up against a well-funded, resourceful, intelligent and powerful adversary in various governments around the world. This is a much bigger issue than regulation and we all need to stay ahead of the game.”

At the core of privacy online and on the blockchain is mathematics and mathematics as any other science is dynamic and evolving and cryptography is evolving and efforts to break cryptography are evolving. I do not see that privacy coins will necessarily go in the same direction or use the same methods. I think it’s healthy with competition and it drives innovation. I think that network security is overlooked by most privacy coins (which is why we have Tor built in) and I know that we will see more of that and as we have seen with the Dandelion proposal, new ideas are emerging all the time. I also think we will see new so called ‘quantum resistant cryptography’ used in privacy coins.

Spectrecoin has raised funding and we will be investing in excess of £30,000,- this year on auditing our cryptography implementation and in particular the ring signature functionality to improve on this and prove its effectiveness. We anticipate increased spending for Spectrecoin over the next few years into research into the privacy tech and we will try to stay in the vanguard of technical development. I also think we will see more decentralisation and decentralised exchanges and so called “atomic swaps” in the near future. However, 5 “real-life” years in crypto-time is almost an eternity so who knows what will happen.

I see that Spectrecoin offers staking, but not masternodes. Why is that?

Spectrecoin is a pure proof-of-stake system and we have no masternode system. This may change if we feel that some form of masternode system will benefit Spectrecoin. I would consider masternodes if they served a genuine function to improve the network but I am not convinced that masternodes is useful for governance for example. I do not want to criticise anyone, but PIVX for example use masternodes to vote on proposals. I use PIVX as an example here and I have nothing against PIVX, I just don’t agree with the masternode governance idea.

PIVX started out as DarkNet and in the beginning, as is the case for most cryptos, they had a small but devoted following and a large number of masternodes are owned by a few people that managed to get in early on. This means that any voting cannot be fair as nobody has any idea of how many times one person has voted and if there are groups of masternode operators making agreements to vote for certain proposals. The community inclusivity might sound good and fair on paper but in reality, it’s deeply flawed and not fair. What am I really saying. Masternodes may lead to a certain centralisation and you could have groups of masternode operators colluding in the voting process. The yield on staking is 5% per year on average for Spectrecoin. I would argue that proof-of-stake is the most secure system at the moment. If we chose to implement a version of masternodes it would be because it improves privacy or network security.

What are Spectrecoin’s plans for privacy tech dev in the next 12 months?

Spectrecoin has had a number of devs working since our inception in 2016 and they have all left the project for a variety of reasons, such as working on other projects or lack of funding. To be able to drive the project forward we then decided around March this year (2018) that we needed to professionalise the project and development to stay relevant. We then introduced a development fund taken from a share of the stake rewards and our developers will be paid at competitive rates, at industry standard levels over time as the fund increases.

We chose to use a model where we want to have full time developers, hired contractors for specific tasks and also commission academic research and enlist specialist companies to complete certain tasks such as cryptography audits. We currently have a core team of developers, @tek who is a software architect from the banking sector and @Helix who is a professional software and devops engineer. We further have a few contractors that work for us on a regular basis. Our devs are aiming to work full time when the nascent dev fund can support this and devs will also get paid in Spectrecoin. I am also aiming to work full time as the project manager. 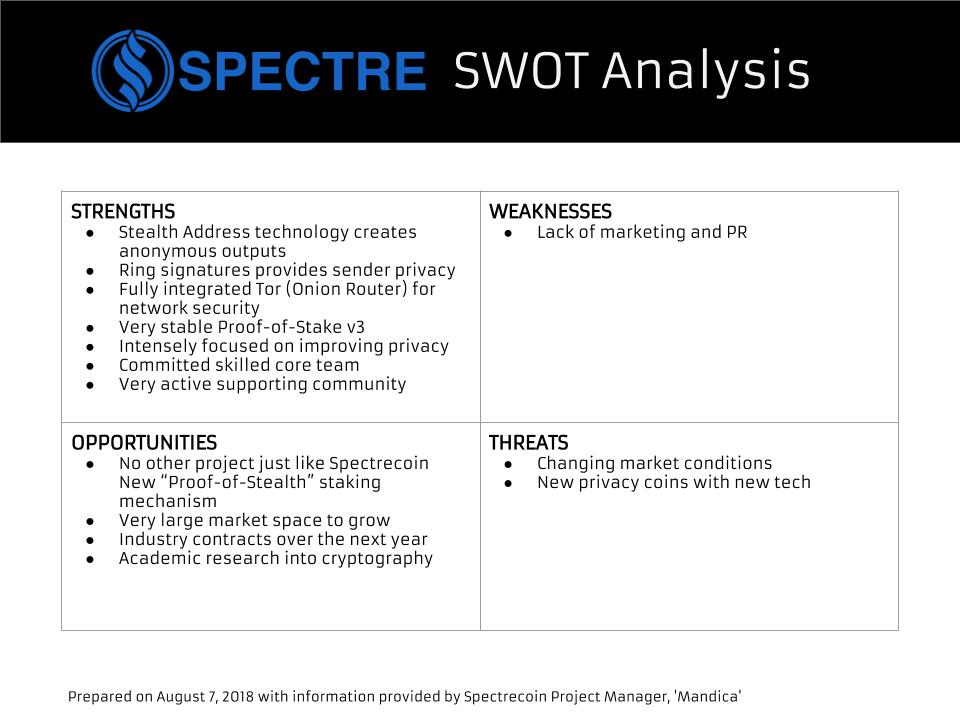