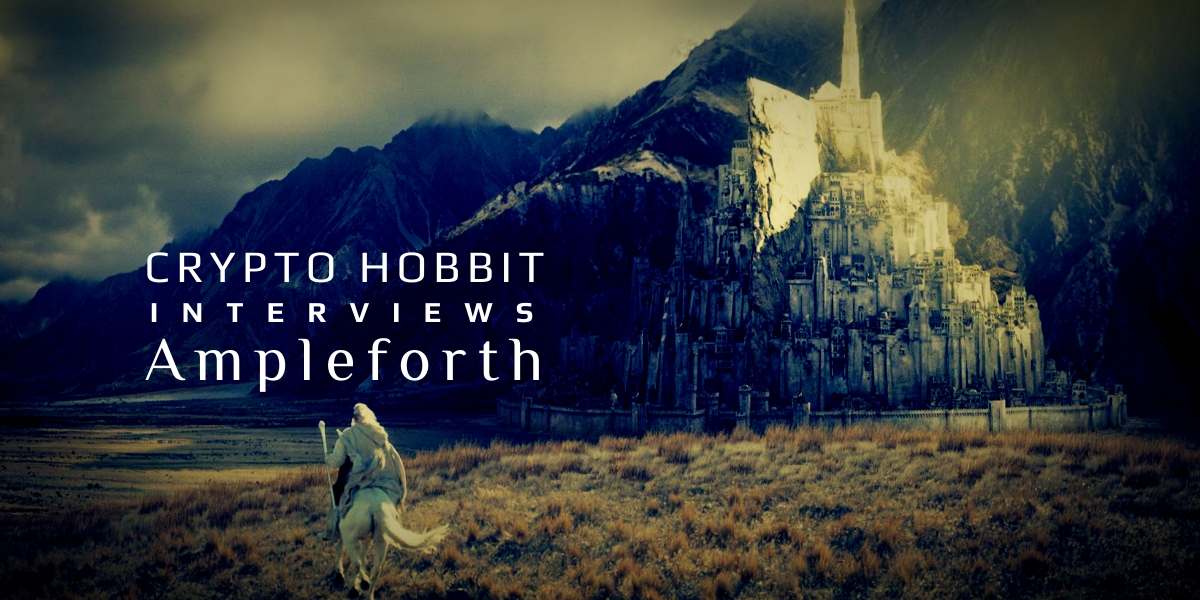 To briefly recap for those of us new to the complexities of stablecoins, the vast majority fall into three categories based on how the stablecoin is collateralized:

Please enjoy this introduction to Ampleforth!

The protocol was named after a character from George Orwell’s 1984 who is responsible for translating poetry into Newspeak, a language designed to limit freedom of thought. When tasked to replace the word “God” in a Kipling poem, Ampleforth refuses, not out of righteousness, or subversiveness, but rather, a simple love for language and respect for the truth. To Ampleforth, no other word makes sense in context and therefore no other word should replace it.

Today, money is issued to a central authority. Banks inflate for a myriad of stressful reasons, and they get to keep or lend the new money they print. Each cycle of inflation dilutes the balance of every holder. Ampleforth, in contrast, is issued directly to the people. The protocol inflates only in response to demand, and distributes directly and proportionally to holders, taking no profits from inflation.

Why does Ampleforth exist?

Let’s imagine you are creating the ideal money from scratch. You would want it to be:

The Bitcoin protocol achieves the first three of these goals, which is incredible. However, due to its fixed supply, the price of Bitcoin will never become stable enough to compete with government currencies, which severely limits its usability. And at saturation, we expect that Bitcoin will behave like a digital gold or silver. Ampleforth extends upon Bitcoin’s progress, adding price stability to its feature set, which is the final ingredient necessary for creating a fully functional independent money.

Ampleforth really only exists for one reason, as is the case with all currencies: to grant users optionality by allowing them to store value in a medium that is convenient for counting and exchanging value.

“We believe that the best monetary system is simply the least greedy system capable of fulfilling all functions of money.”

To date, the ability to adjust supply either through interest rates or printing money, has been essential for achieving near term price stability. Unfortunately, when central banks inflate the new money is held or lent at the discretion of central authority. This is why fiat money holders tend to lose purchasing power over time. Amples inflate and contract directly to coin holders, allowing them to near term price stability without diluting a holder’s balance.

Because of how inflation works in central bank money today, fiat money can be used as an instrument for raising fast capital, stimulating economic growth and employment, all good things. But it also lends itself to political abuse, and the more politically conflicted a money is, the less optionality it grants. In today’s global economy, reserve currencies such as the US Dollar have to support both domestic issues like unemployment and domestic output, while simultaneously supporting global economic output and stability. Policies that advance domestic goals are generally bad for global interests, and policies that advance global interests are generally bad for domestic interests.

Moreover, sovereign monetary policies are frequently used as bargaining chips in global economic affairs. For this reason, Amples inflate and deflate only in response to market demand, making them agnostic to political agendas. Again: the goal here is to create a money that grants maximum optionality. This way holders can choose whether to take advantage of sovereign agendas or be insulated from them entirely.

It’s about giving people the choice.

1976, the Nobel Laureate Friedrich Hayek authored an important and prescient paper titled: “The Denationalization of Money.” A work many people in the cryptocurrency community consider to be the philosophical underpinning of the movement.

Hayek painted the picture of a world where money, like banking, is denationalized. He believed that unlike law and language, money had not been allowed to evolve due to sovereign influences suppressing competition. And he predicted that if governments were to allow for it, currencies would naturally evolve to compete on increased stability, eventually eliminating the devaluing effects of inflation altogether. He asked that we do two things:

Hayek believed that opening the free trade of money would lift the floor of monetary quality by placing pressure on weak currencies to execute monetary policy at the level of their best sovereign peers, he called this the “practical” approach. For example, if citizens of Venezuela or Argentina could simply buy in and out of US dollars, there would be no excuse for extended abuses of monetary policy. He further believed that the introduction of independent money would raise the ceiling of monetary quality by placing pressure on the best sovereign currencies to be more responsible with their issuance and regulation of supply. He called this second phase the “generalized” approach to denationalization. Finally, he believed that competition between competing denationalized currencies would result in the best possible outcome.

The vast majority of stablecoins we see today are fiat-collateralized. Back in 2015, unbanked cryptocurrency exchanges needed a fiat-pegged token so that traders could move in and out of speculative positions on floating price assets like Bitcoin. Many of these exchanges existed outside the United States and lacked direct banking relationships. However, because these tokens are centralized, their use is highly permissioned. At any point a banking partner can be restricted, forcing tokens to evade authority or cease operation.

Too many of today’s stablecoins are focused on filling the gaps left by Tether, but bringing fiat to the blockchain does not mean we have created better money. Fiat monies (and by extension fiat-collateralized coins) are good at near term value storage, but bad at long term value storage. Conversely, gold and Bitcoin are good for long-term value storage but bad at near-term value storage. Like Bitcoin, algorithmic stablecoins are designed to be market driven, resistant to regulation, and have strictly enforced supply policies that cannot be compelled by central authorities to change. With one major difference: unlike Bitcoin, they will be functional units of account, allowing them to compete with sovereign currencies on stability.

At saturation, Amples will be capable of storing both near and long term value. The Ampleforth protocol disintermediates inflation in the most direct way imaginable: the currency adjusts supply only in response to demand (avoiding political influence) and inflates / deflates directly and proportionally to holders. By adjusting supply to coin holders directly, the Ampleforth protocol avoids the devaluing effects of inflation observed in fiat currencies, while re-engaging the supply mechanism that creates near-term price stability.

Ampleforth is fulfilling its mission to create “better” money:

The Ampleforth protocol takes no seigniorage, applies no demurrage, adds no transaction fees. Question: How does Ampleforth “make money?”

Like Bitcoin, Ampleforth is decentralized and market driven. It does not extract profits from inflation and it does not make money. The protocol passes all risk and reward to network participants. For more information please see: ampleforth.org. We tried to make it as clear as possible there.

Elastic Supply = The value of any sum of money held, is simply its price per unit multiplied by the quantity of units. (Value = Price * Quantity)

“Throughout the history of money, people have tended to think of price as the component that fluctuates with demand, while quantity remains static. The Ampleforth protocol inverts this, holding price static while allowing quantity to change according to demand instead.”

The Bitcoin Model: Adam purchases 1 Bitcoin at $1, demand increases and he now has 1 Bitcoin worth $4000.

The Ampleforth Model: Betty purchases 1 Ample at $1, demand increases and she now has 4000 Amples each worth $1.

By adjusting supply to coin holders directly, the Ampleforth protocol avoids the devaluing effects of inflation observed in fiat currencies, while re-engaging the supply mechanism that creates near-term price stability. 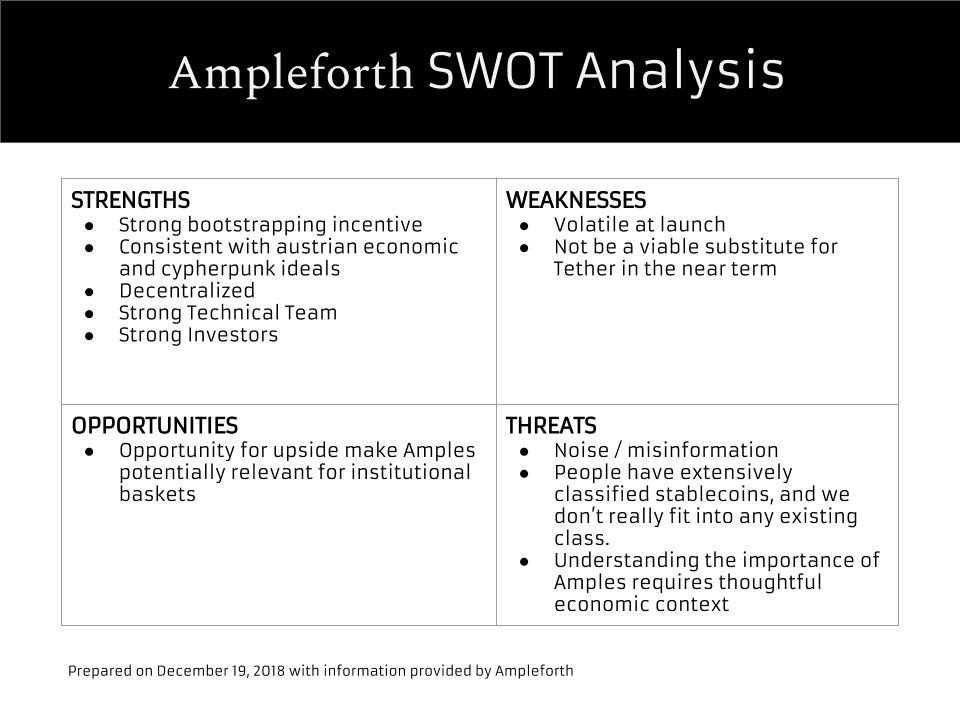