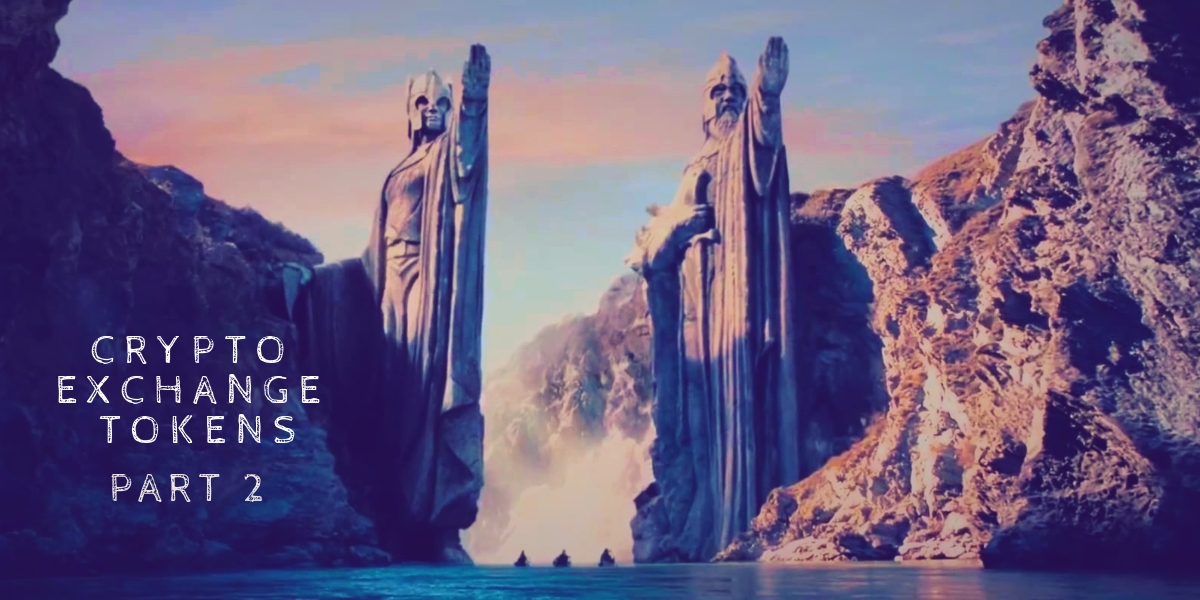 Cryptocurrency exchanges are developing some of the most exciting advancements in the crypto space. Exchange tokens not only facilitate these advancements, but also capture the value of an exchange’s level of adoption (trade volume).

Exchange tokens literally give holders the opportunity to share in the growth of crypto infrastructure. The industry is young, and the opportunities are huge.

Enjoy part 2 of this series! It’s a brief look at cryptocurrency exchange token utility, and a crypto exchange matrix of aggregated data will be produced throughout this series. Don’t forget to check out the other parts of this series as well:

I’m focused on a core group of nine exchanges that not only have a token, but that also have a decent level of transaction volume. Exchanges need volume to survive, and these nine are gaining traction: (listed in alphabetical order)

What are the benefits of Crypto Exchange Tokens?

It’s pretty simple, really: for the most part, exchange revenue comes from trading fees. The bigger the volume traded, the more fees generated, the bigger the profit. These profits are shared with token holders in a variety of ways, including but not limited to:

[Click on the table below for the view-only spreadsheet] 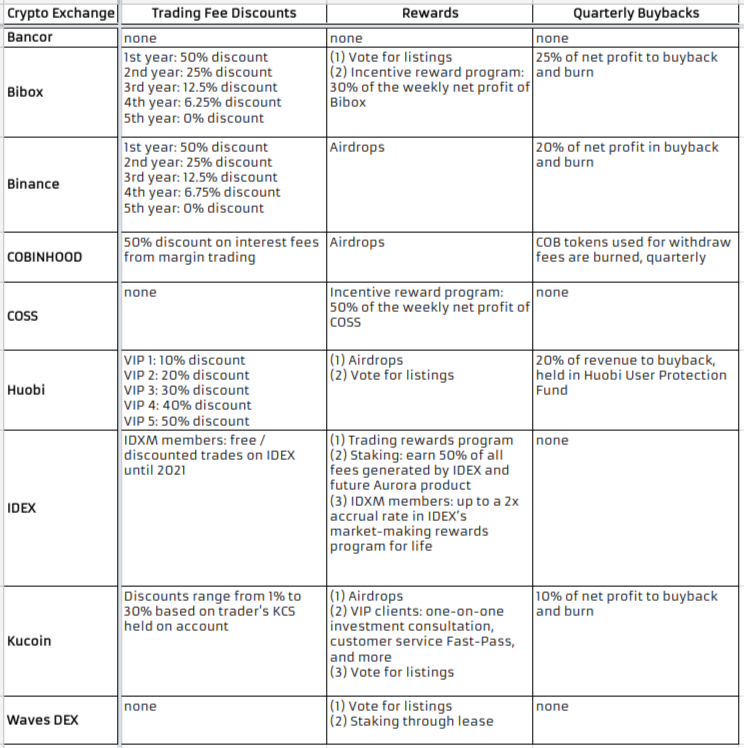 BNT is the symbol for the Bancor Network Token, the world’s first Smart Token. BNT is the hub token that connects all tokens in the Bancor Network, allowing them to be easily convertible to each other. While the BNT token does offer an interesting utility in its bridge ability, there are no incentives for long-term holders of BNT token beyond capital appreciation, as seen below.

Bibox recently made changes to both its fee structure and buyback program, linked below. For example, Bibox increased the rewards of its incentive program and is actively targeting both traders and holders, with qualification for rewards requiring that users trade at least once per week, and the distribution rate of rewards corresponding to how much BIX that user holds on account.

BNB is the ERC20 token native to the Binance exchange and has a fixed supply of 200 million. From this pool, 100 million BNB tokens were distributed during the Binance ICO. BNB can be used to pay any fee on the platform including, but not limited to, exchange fees, withdrawal fees, and listing fees.

With a large portion of COBINHOOD’s income coming from ICO deals, and that market largely drying up in the last three months, will COBINHOOD’s zero-fee incentive structure continue to be profitable? Not only that, but the primary bonus to COB token holders was the opportunity to acquire ICO tokens at discounted rates. With that decline of ICOs, is this still a great advantage for COB holders?

With exchange tokens, value is ultimately determined by adoption. In the case of ERC20 token COSS, specifically, investors worry about low trade volume and have taken to Reddit to suggest changes for increasing both listings and trading.

Huobi Tokens (HT) are the tokens powering Huobi’s blockchain, backed by a loyalty point system. These tokens did not derive from an initial coin offering (ICO). Rather, users acquire HT by purchasing ‘Point Cards’ on Huobi Pro. A Point Card is Huobi’s pre-paid card used to pay for basic service trading fees, with 1 point = 1 USDT.

Interestingly, there are actually two tokens related to IDEX and exchange’s parent, Aurora Labs. They are the IDEX Membership token (IDXM) and the Aurora token (AURA).

The WAVES token represents innovation, as the Waves platform allowed users to create their own token to fulfill specific needs such as internal currency, decentralized voting, rating systems, loyalty programs, crowdfunding, or even funding startups. Basically, any coins built on the Waves platform are supported.

That said, the WAVES token offers investors neither trading fee discounts nor entitles them to the benefits of quarterly buybacks, as seen below.

Stay tuned for Part 3 of this series, which will dig into the valuation of Crypto Exchange Tokens. I will be reviewing such elements as market cap, circulating tokens and the TVEV ratio in order to create a baseline for valuing exchange tokens as under-, over-, or fairly-valued against one another.

#CoinMarketCap just released a new tab tracking #cryptocurrency exchanges by volume, number of markets, and the dates they were launched. A quick glance at the distribution of their ages show that the average #CryptoExchange has been around for only about 2.7 years. #Crypto #CMC pic.twitter.com/6bPl9Co6SI

Using #Coinmarketcap, we were able to identify 28 unique fiat currencies linked to $BTC across each #cryptoexchange. When considering market activity as a factor, the 2nd graph reveals a positive, non-linear relationship between the # of fiat gateways and volume. #fintech #dyor pic.twitter.com/up1LN2AOhO