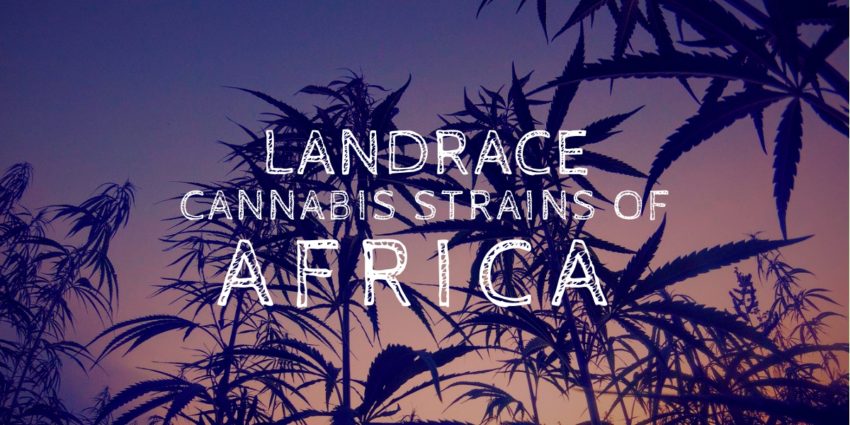 There are four major geographic areas credited in the cannabis origin story. These include Asia, Africa, the Middle East, and Latin America. Most researchers agree that cannabis began in central and south Asia, with the five oldest cannabis strains known recognized as Afghani, Aceh, Hindu Kush, Nepalese and Thai. Today we’re diving into the landrace cannabis strains of Africa.

The equator runs directly through Sub-Saharan African giving it an ideal climate for cannabis to thrive. When looking at African landrace strains from a top level, we see uniform characteristics including medium height, elongated shape, sturdy central stems, and potent, widely-spaced buds. Known for their truly medicinal benefits, African landrace strains are sought for their energetic and uplifting high and are primarily Sativas. In fact, African landrace cannabis strains contain the highest level of THCV cannabinoid of any other landrace strains. Currently researched for use in diseases such as Parkinsons, this cannabinoid produces appetite suppression rather than appetite stimulation.

Landrace strains native to Africa include but are not limited to Swazi Gold, Kilimanjaro, Durban Poison, Malawi, Ethiopian, Kwazulu, Zamal, and Angola Gold. Although technically part of Africa, the northern African landrace strains more closely resemble their Middle Eastern cousins, with strains tending to resinous Indicas rather than the famous Sativas of South Africa. Note that I did not mention Rooibaard, also known as “Swazi Redbeard.” This is because most agree this landrace strain is long gone, with only remnants seen in distant relatives. Also not included is Red Congolese, or Congolese, which is of debatable African genetics, with some arguing that the genetics of this strain are in fact Afghani and Mexican landraces and not African landrace strains at all.

There are many amazing African landrace strains growers seek to add to their seed banks, genetic libraries, and breeding operations. See below for more information on some of these individual landrace strains.

Durban Poison is a South African landrace cannabis strain from the port city of Durban dating to the 14th-century, when it was cultivated by Khoikhol, San, and Bantu indigenous tribes. This amazing pure-Sativa was smuggled from South Africa to the United States in the 1970s by famous marijuana activist Ed Rosenthal, who had been on a mission to find new genetics. With a sweet, fruity flavor, and producing a stimulating, uplifting, and creativity-boosting high, Durban Poison is known for potency combined with clarity as a result of high THC levels, low CBD levels, and a robust cannabinoid and terpene profile – CBG (0.6 – 1.4%), THCV (0.2% – 1.8%), Myrcene (up to 0.5%), and D-Limonene (up to 1.2%).

This early-flowering African Sativa is a landrace cannabis strain from the Kenyan slopes of Kilimanjaro, cultivated originally for use in hunting, religious practices, and ceremonies. Referred to by natives as “elephant stomper” for its hyper and energizing effects, this plant grows vigorously and with many branches. Buds are resinous, have a lemon and fruity aroma, and contain a high THC level at around 18% that provides an intense and sometimes overwhelming psychedelic, cerebral high.

The Malawi landrace strain, often referred to as “Malawi Gold,” is a pure Sativa from the Salima region of Malawi. Similar to Thai landrace cannabis strains, these slender plants have a long flowering time and sturdy central stem. Malawi landrace cannabis strains tend to medium in size and have dark green leaves with thin, serrated leaflets. Meanwhile, Malawi Gold is know for its sweet, resinous, highly psychoactive and enormous buds, some of which reach two feet in length. These buds are composed of elongated calyxes with few leaves and wide node spacing.

Moroccan landrace cannabis strains come from North Africa’s Rif Mountains, a region in northeast Morocco and in the plateau adjacent to the city of Ketama. There, cannabis growing dates back to the 15th century. These cannabis plants produce resinous buds used primarily for hash and grow similarly to Hindu Kush landrace cannabis, with little branching, strong central colas and relatively short plants at one to two meters.

Primarily grown by the Nguni, and known for bountiful yields of dense, mango-smelling buds marked by an elongated, stick-like shape, Swazi Gold is a pure Sativa landrace cannabis strain from Swaziland, which borders South Africa and Mozambique. Swazi Gold forms a solid trunk with a large central cola and many secondary branches covered in wispy Sativa leaves. Known for its resilience and ability to grow in all weather conditions, Swazi Gold produces potent mental effects due to its high THC level (at from 18% to 27%) and is a favorite for medical conditions such as attention deficit disorders, stress, and depression.

Join us next time as we take a deep dive into the landrace cannabis strains of the Middle East, to be followed by posts on Latin America, heirloom strains, and then, finally, the F1 hybrids that brought global fame and awareness to landrace strains.