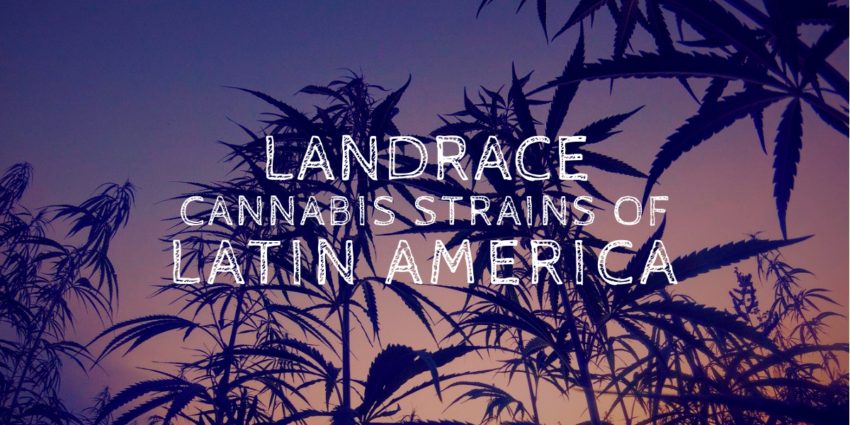 There are four major geographic areas credited in the cannabis origin story. These include Asia, Africa, the Middle East, and Latin America. Most researchers agree that cannabis began in central and south Asia, with the five oldest cannabis strains known recognized as Afghani, Aceh, Hindu Kush, Nepalese and Thai. Today we’re considering the landrace cannabis strains of Latin America.

Are Latin American cannabis plants true landrace strains, or are they actually heirloom strains originating from African Sativa varieties, such as Angola Red? While it’s possible that African cannabis genetics lead to Latin American strains due to trade, travel, and the spread of civilization, no one is certain. It seems equally likely that these cannabis strains developed on their own for hundreds of years before humans began selectively breeding plants such as Colombian Gold and Panama Red.

Further, while many consider Jamaican cannabis strains to be landrace rather than heirloom, based on research this author is fairly certain that Jamaican strains are in fact strains brought to the island and harvested there for generations, such that unique strains were developed with morphology ideal for the climate. Therefore, by definition, Jamaican strains are heirloom, not landrace, and will be included in the next blog post in this series.

Mexican landrace strains were named by locals for their place of origin. With names such as Chiapan, Guerreran, Nayarit, Michoacan, Oaxacan, and Sinoalan, it’s clear that cannabis was grown along the Pacific coast in Mexican states from Northern Sinaloa through Nayarit, Jalisco, Michoacán, Guerrero and Oaxaca to Southern Chiapas.

As we consider regions south of Mexico, such as Belize, Costa Rica, El Salvador, Guatemala, Honduras, and Nicaragua, we come a tropical climate that allows for cannabis plants to thrive. Heading further south we come to the isthmus that connects North and South America. On one side is Panama and on the other side is Colombia. Both of these countries are famous for their landrace cannabis.

Strains of the Atlantic coastal areas around Panama grew in low-lying, wetlands, such as Cauca and Narino. Landrace strains considered Colombian began in much a much harsher climate in the mountains of Sierra Nevada de Santa Marta before eventually spreading to inland areas such as Meta. This is the point at which Colombian landrace strains were cultivated and selectively bred. Some popular landraces produced in this area include Colombian Gold, Cali Hills, Punto Rojo and Santa Marta Gold.

As Central and South American countries share similar climates, this author has chosen to group the landrace strains of these regions into one group called “Latin America.” Truly, these plants not only share similar climates, but similar growing traits (morphology) and highs as well. Did Latin American cannabis originate in Mexico, and then travel South, or was it the other way around? We’ll probably never know!

What we do know is that cannabis indigenous to these regions have common traits that in general include:

Originating in the Guerrero Mountains of Southwest Mexico, this landrace cannabis strain was named for its nearest city, Acapulco. At from 20% to 24% THC, this potent Sativa has a distinctive brownish gold color and was one of the most sought-after cannabis strains of the 60s, with smuggling via the Tijuana border worth considering for some, despite the risks. Terpenes found in Acapulco Gold include Caryophyllene (Pepper), Limonene (Lemon), Myrcene (Musk, mango), Pinene (Pine), and Terpinolene (Wood).

Many believe Colombian Gold to have gained its mind-blowing potency as a result of adaptation to the harsh environment in which this landrace cannabis strain originates. The very isolated Sierra Nevada de Santa Marta mountains, home of the famous Colombian Gold, is one of the world’s highest coastal ranges (reaching altitudes of over 18,000 feet just 26 miles from the Caribbean coast) and has a unique tropical mountain climate. Here, temperatures can range daily from freezing to hot. As a result, this Colombian Sativa is shorter than many other landrace Sativa strains.

Like many other landrace strains entering cannabis breeding programs during the 1960s and 1970s, Colombian Gold seeds were smuggled into the U.S. by counterculture cannabis revolutionaries. This strain became instantly popular for its high THC levels (at from 15% to 20% THC) and skunky, pungent aroma. Colombian Gold buds contain terpenes such as Caryophyllene (Pepper), Humulene (Hops), and Myrcene (Musk, mango).

This Sativa landrace cannabis strain is named in part for its fiery red pistils, the “hairs”, that cover its dark green buds. Providing a mellow, yet energetic high, Panama Red became popular in the late 1960s during the hippy psychedelic era. This strain was popular for several decades, but eventually fell out of favor because of its long flowering time (at from 11 to 12 weeks) and its relatively low THC levels (at from 10% to 16% THC). With a pungent and earthy base aroma, Panama Red contains terpenes such as Caryophyllene (Pepper), Humulene (Hops), Pinene (Pine), Terpinolene (Wood).

Join us next time as we examine heirloom cannabis strains!