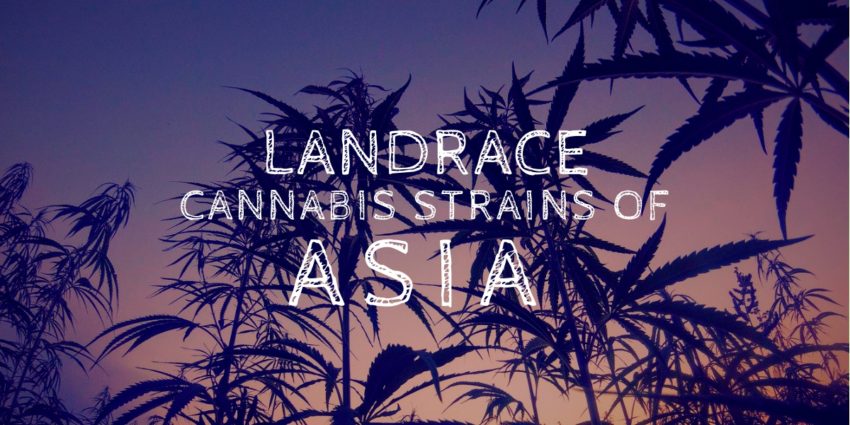 There are four major geographic areas credited in the cannabis origin story. These include Asia, Africa, the Middle East, and Latin America. Most researchers agree that cannabis began in central and south Asia, with the five oldest cannabis strains known recognized as Afghani, Aceh, Hindu Kush, Nepalese and Thai. Today we’re diving into the landrace cannabis strains of Asia, with attention on central and southeast Asia.

“Asia” as a region covers a huge area and several genetically important strains. When looking at Asian landrace strains from a top level, we see uniform characteristics including aromatic flowers with high resin production, very tall plants, and primarily Sativa genetics. Landrace strains native to Central and Southeast Asia include but are not limited to Aceh, Altai (South-Central Russia/Mongolia), Cambodian, Luang Prabang, Nepalese and Thai. See below for more information on these individual landrace strains.

Aceh is a pure Sativa landrace that shares a name with the region of Indonesia from which it originates. Also known as “Atjeh,” this old strain of cannabis typically grows tall and thin and has distinct flavors of earth, lemon, and mango. Aceh flowers are aromatic, and buds are small and minty green, with orange hairs and a dusting of white trichomes. As you’d expect from an Indonesian landrace, this flower prefers tropical climates and relatively steady temperatures. Considered the finest among Indonesia’s landrace varieties, the high of Aceh is creative, happy, and euphoric, and is surprisingly powerful given the generally low 10% THC level. In medical circles, Aceh is popular in the treatment of nausea, stress, anxiety and depression.

Altai is a federal subject of Russia in the Siberian Federal District. The Altay Mountains are a mountain range in central Asia, where Russia, China, Mongolia and Kazakhstan come together, and where the rivers Irtysh, Ob and Yenisei have their sources. Coordinates: 52°30′N, 83°00′E. Altai Krai has rolling foothills, grasslands, lakes, rivers, and mountains. The climate is severe with long cold dry winters and hot, usually dry summers. Here is a thread showing pics of this pure Sativa landrace strain from Russia: https://www.icmag.com/ic/showthread.php?t=83312

Native to the country’s mountainous Southwestern regions, the landrace cannabis strains of Cambodia grow to be tall with long, thin leaves that spiral loosely outward from the central stems. They are potent, pure Sativas known for high THC levels, with rare instances found at up to 30% THC, giving the flowers a whitish sheen when seen from a distance. Flowers normally smell floral and skunky. Expect a great sativa experience: euphoria, boosts in energy, motivation and inspiration, increase in focus, blissful feelings, and a mood often meant to socialize.

Luang Prabang, also known as “Lao Sativa”, is a pure Sativa landrace strain originating in northern Laos. This strain is a tall, thin Sativa with medium-length internodes, a pale color, long flowering period, and medium yield. As a pure Sativa of southeast Asia, Luang Prabang shares features with the Thai landrace strains, including aroma, high, and growth characteristics. However, unlike Thai varieties, Laos landrace cannabis has been preserved from external influences, conserving the genetics and authenticity of indigenous varieties. Luang Prabang may taste fruity, spicy, earthy, sour, or piney. When smoked, this strain creates a feeling of euphoria and calm.

“Nepalese” doesn’t refer to one landrace strain, rather the Nepalese landraces are a collection of several Sativa strains and phenotypes from the area. As landrace strains, the characteristics of indigenous Nepali cannabis are found to be uniform and in general include tall, thin plants with elongated, psychoactive flowers of fresh aroma and high resin production. THC content for these flowers ranges at from 14% to 17%, with a complementary CBD level at around 1% and terpene profile found to contain Myrcene, Linalool, and Carene. Nepalese landrace strains have large, fluffy, popcorn-shaped, dark-green nugs with amber hairs and a fine layer of clear trichomes in sticky resin. Known to have powerful cerebral effects, Nepalese is recommended for treating chronic stress and pain, depression, and even fatigue.

Thai landrace strains are pure Sativas with historic importance as the cannabis of choice for breeders seeking to add potent and unique genetics to their programs. Indigenous Thai cannabis strains are found to be uniform and, in general, characteristics include: tall plants with many branches and leaves with long, 9 to 11 inch serrated leaflets, susceptibility to hermaphroditism, sweet, aromatic flowers with elongated calyxes, low CBD levels, and high production levels of resinous, psychoactive THC (14% to 24% THC), and a terpene profile that includes Caryophyllene – “Pepper”, Humulene – “Hops”, Pinene – “Pine” and Terpinolene – “Wood”. As a pure Sativas, Thai landrace cannabis strains produce highs that are stimulating, head-centered, energizing and euphoric. For medicinal uses, patients prefer Thai strains for depression, stress, and headaches.

One famous Thai landrace cannabis strain was called “Chocolate Thai”, which first made an appearance in the U.S. sometime in the 1960s as “Thai sticks,” spindly flowers tied to a bamboo stick that were renowned for their potent high. These buds were slender and airy, medium-to-dark brown in color, and possessed both a unique chocolate-coffee aroma and a distinct chocolate flavor. Thanks to the combination of its flavor, coffee-colored buds, and a cerebral high, the strain was very popular until the 1980s. Eventually, the strain’s popularity began to fade due to its lower THC level and difficulty to grow, with 10% THC as a high-rated sample and seeds not only being difficult to germinate, but also tending to die easily or become hermaphroditic. Because of these difficulties, some claim that true Chocolate Thai genetics went extinct in the mid-to-late 1980s. Chocolate Thai’s special effect is its burst of creativity and focus, and the high is amazing for anyone in need of inspiration.

Join us next time as we take a deep dive into the landrace cannabis strains of Africa, to be followed by posts on the Middle East, Latin America, heirloom strains, and then, finally, the F1 hybrids that brought global fame and awareness to landrace strains.