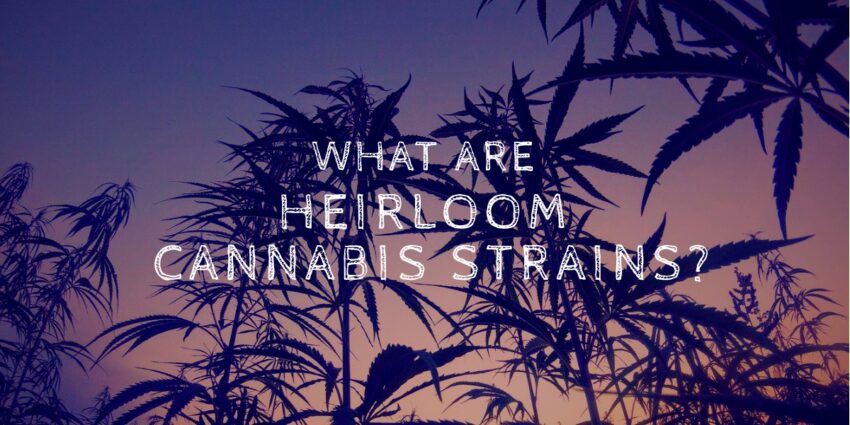 What is heirloom cannabis?

Heirloom cannabis strains are landrace strains, pure in their original genetics, that have been cultivated with guidance from humans for at least 50 to 100 years outside of the landrace’s native environment. Landrace strains, to recap, develop for many hundreds of years without any aid from humans, establishing a perfect harmony with their natural geography.

When seeds from landrace strains are cultivated outside the zone in which they evolved, they produce what geneticists and breeders call “phenotypes”. Phenotypes are transmogrifications of the plant that result in similar, but different characteristics. These differences can be seen in an heirloom cannabis plant’s morphology, development, and biochemical properties, and may result in variations in flowering times, potency, cannabinoid profiles, and even medical uses from the original landrace strain.

Where do heirloom cannabis strains come from?

Many heirloom weed strains were developed in Hawaii and California. As it turned out, the tropical climate and fertile soil of Hawaii was ideal for growing strains originating from areas such as Thailand and India, while Northern California, with its slightly cooler climate, provided the perfect conditions for strains originating from the high altitudes of the Hindu Kush mountain range.

However, were we to consider records that suggest cannabis is only native to central Asia, then all BUT the landrace strains of this region would be considered heirloom strains. This would include strains commonly referred to as landrace in regions such as Africa, Latin America, and South Asia.

Angola Red, for example, is technically a Latin American heirloom developed from a strain found in Africa even though many consider Angola Red to be Latin American landrace cannabis. Were one to read up on Angola Red, it might be seen that the African strain in Angola Red’s lineage is often referred to as landrace, although it would technically also be heirloom. Some strains known to the Hawaiian islands for many years are also technically heirloom, although these local strains have developed their own Hawaiian flavor and potency. Examples of these strains include Hawaiian Duckfoot, Puna Buddaz, and Moloka’i Purpz. Another case of confusion can be seen in Jamaican “landraces” such as Lamb’s Bread, which are technically heirloom, but have such unique morphology that many consider these plants as native to Jamaica.

To review from our previous articles in this series, were we to consider only central Asian cannabis as landrace, these strains would technically be heirloom and not landrace:

Certainly, there is some confusion in identifying cannabis strains. What are your thoughts? Should plants of Africa, Asia, Jamaica, and Latin America be considered landrace, or heirloom? Have they developed and adapted for a long enough time away from their parents to be called landrace, or does the fact that human cultivation is involved prevent this possibility, forever categorizing these strains as heirloom? This is a debate that has raged for decades.

Join us next time as we examine the F1 cannabis strains that made landrace cannabis famous!