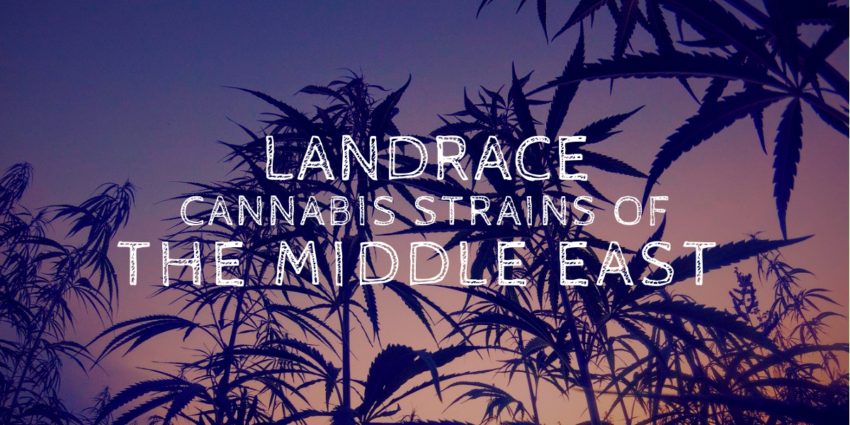 The climate of the Middle East is great for growing cannabis and is home to many important landrace cannabis strains. The primary Middle Eastern region famous for its cannabis is the Kush Mountain range on the Afghanistan-Pakistan border. Strains native to the Middle East include but are not limited to Afghani, Hindu Kush, Lashkar Gah, Turkish, and Lebanese, with individual variants identified such as Mazar-i Sharif and Chitral. When looking at Middle Easterns landrace strains from a top level, we see uniform characteristics including small, fir-shaped, stocky plants with thick, wooded stems, dark green leaves with wide leaflets (class Indica leaves), and thick buds noted for high levels of resin perfect for hash production. See below for a brief discussion on several landrace cannabis strains important for their role in cannabis history and breeding programs around the world.

The Afghani Indica landrace cannabis strain originated in the Hindu Kush Mountain region close to Pakistan and northern Afghanistan near the borders of Tajikistan and Uzbekistan. Developed over centuries to have high resin levels rather than high THC levels (ranging from 13.5% to 17% THC on average), Afghan Kush is used to produce Charas, a type of handmade hash that villagers smoke in hookahs. Noted for its distinct smell of hash dipped in pine oil, the sweet tasting Afghan Kush is an ancient cannabis strain that was smuggled via seed into North America in the 1960s and 1970s by cannabis enthusiasts returning from their travels along the “Hippie Trail”, which was an alternative Silk Road that wound through Turkey, Iran, Afghanistan, Pakistan, India, and Nepal. Used as a primary building block for many breeding programs around the world, Afghan Kush is a legendary landrace strain that changed the world of cannabis forever.

Hindu Kush is a pure-Indica landrace cannabis strain famous for its growing traits – small in size, fast flowering, and high resin production. One of the original landrace strains, growing on the slopes of high-altitude Afghan and Pakistani valleys, Hindu Kush was traditionally used for hash production and isolated to the Kush Mountains for centuries before seeds were smuggled to the U.S. in the 1960s and 1970s. With a low calyx-to-leaf ratio and many small, resin-covered leaves developing from the flowers, Hindu Kush’s phenotypic expression is the result of centuries of adaptation to a dry, arid climate and of strict genetic selection carried out by local growers for many generations. Popular Hindu-Kush strains include Chitral and Mazar-i Sharif. Both grow similarly and are used medicinally for conditions such as anxiety, sleep problems, and eating disorders. Where these strains differ is in smell, with Chitral hinting at spicy black pepper or cloves and Mazar-i Sharif noted for an aroma reminiscent of peaches and apricots.

Lashkar Gah, a pure-Indica cannabis landrace strain named for its geographic origin in southern Afghanistan, is noted for its consistency and simplicity. Like Afghani and Hindu Kush cannabis strains in that Lashkar Gah is produced primarily for its high quality hash, but unlike Afghani and Hindu Kush landrace strains in that these plants grow very tall, thriving in limitless space, Lashkar Gah is legendary for its exotic fragrance – pungent, earthy, and with notes of pine and spice. Buds of Lashkar Gah are a deep green color, heart-shaped, covered with both amber pistils and a thick layer of sparkling trichomes, and maintain an average THC concentration of from 11% to 13%. For medical purposes, patients find Lashkar Gah particularly helpful for treating muscle spasms, insomnia, stress, anxiety, and eating disorders.

Join us next time as we take a deep dive into the landrace cannabis strains of Latin America, to be followed by posts heirloom strains, and then, finally, the F1 hybrids that brought global fame and awareness to many of the landrace strains.